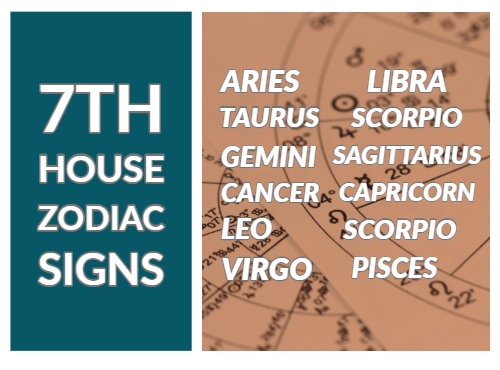 This sign in the seventh house makes the native commit bad deeds if Mars is weak or afflicted. He may be impotent. His wife may badly behave, ill-tempered and greedy. She would not be the right match for the native.

He may marry more than once. He will be miserly and fickle minded. The first house for the wife of the native also has the first sign.

Therefore if a sign is afflicted that part of the wife’s body represented by that house will either have trouble or defect. Mars, the owner of the seventh house, is also the owner of the second house. If it is powerful the wife will be long-lived.

Mars will be the significator of death for the native. If it is placed in an adverse house, i.e., the sixth, eighth or the twelfth house, it will cause much physical trouble to the native.

The wife of the native will be house-proud, well behaved and will earn independently. She will be good looking. She will handle money wisely.

The native and his wife will enjoy socializing. The owner of the seventh house is Venus here, which is also the owner of the twelfth house. This sets up a link between the first and the sixth house for the spouse of the native and will, therefore, cause illnesses or trouble from enemies to the spouse in its major or sub-periods especially if the owner is afflicted or badly placed.

A powerful Venus is excellent for the longevity of the children and wife. The native will be sensual. His second child may be sickly. The native is prone to suffer losses in a partnership.

The native will have a fair, learned, good-tempered and wealthy wife. She will be engaged in intellectual pursuits and will be of an independent nature. If there is inadequate communi­cation between the two married partners it may lead to an early break down of married life.

Influence of separative planets on the seventh house, its owner and significator of spouse (Jupiter or Venus as the case may be) will cause an early separation between the two. The spouse will leave the native and live elsewhere.

His maternal uncle may be an eloquent person. His second child may get associated with the government due to his intellectual attainments. The native’s father will be wealthy if Mercury is strong and well placed.

The spouse will be kind-hearted, sentimental, sensual, hand­some and changeable. The native will many more than once or will have serious liaisons. The Moon if powerful and away from the Sun will ensure a long living spouse.

The native will be attracted to the mother figure and will seek maternal traits in his wife. His mother will have serious mental troubles if the Moon is badly placed and weak. His father will have varying income and may have elder sisters than brothers.

The native will have to be careful in dealing with his spouse otherwise there may be tension in domestic life.

The native’s father will gain from the government if the Sun is strong and well placed. His maternal uncle will not be rich. The native will try to enter into a partnership with highly placed persons.

The spouse will be soft-spoken, kind-hearted and learned but she will be finicky and critical of others. The second child of the native will have proficiency or interest in languages.

The native will be changeable in his affections and he may have more than one marriage. The owner of the seventh here is also the owner of the fourth house.

The spouse will, therefore, be connected with the government. His younger brother/sister may benefit from speculation or games of chance or may have the eloquence or musical talent. A strong and well placed Mercury will make the maternal uncle of the native very wealthy.

The spouse of the native will be cultured, elegant and hand­some. She will like to collect expensive but artistic items. She will be fond of jewelry, perfumes and good things of life.

The spouse will be passionate, generous and loyal and will work for domestic peace. Venus, the owner of the seventh house here is also the owner of the second house. Venus is, therefore, a powerful significator of death for the native.

The native may earn his wealth through partnership. He will have good meals.

The spouse of the native will be argumentative, jealous and of a quick temper. He will also have a weakness for women. The native will have to be careful in communicating with him otherwise there is a likelihood of separation.

Here Mars is the significator of two houses namely the seventh and the twelfth houses, which are representative of sex urge and pleasures. If Mars influences the fourth house and the Moon, sex will be uppermost in the mind of the native.

If Mars influences the fifth house and Venus, the native will be oversexed, he will have love affairs and he will get married to one of his beloveds. If Mars is powerful the children of the native especially the first born, will be long-lived and healthy. This can be further analyzed in the manner similar to Aries in the twelfth house.

The native will gain from the government, and if Jupiter has a relationship with the first house through aspect or occupa­tion, the native will occupy a high government position. Jupiter, being the karaka for husband, will in a female chart be a prominent significator of husband. If Jupiter is powerful, the husband will be long-lived and healthy.

He will be a teacher, lawyer or a religious preacher. If Jupiter has a connection with the fourth house, the spouse will be in government service.

A powerful Jupiter is a clear indication that the father of the native will be wealthy and will earn without much effort since Jupiter is the significator for wealth and is the owner of the second and eleventh houses here as counted from the ninth. This can be further analyzed in the manner similar to Pisces in the tenth house.

The spouse will be from an ordinary family and will look up to the native for guidance. However, the family of the spouse will continue to have a prominent place in the life of the spouse. The owner of the seventh house is Saturn which also owns the eighth house.

If Saturn is powerful the native’s spouse will be long-lived, rich and hard working. The elder brothers/sisters of the native will gain in property matters through him and undertake short journeys for educational purposes. The spouse will talk little but rudely. A weak Saturn will make the native sickly.

The relationship with the op­posite sex can also be Platonic for intellectual and companionship reasons. The spouse can be from a family lower in status than the native’s and much senior to him in age.

The native’s maternal uncle may be rich. The native will not be successful in partner­ship and may fall sick or face other troubles in journeys.

The native will be the happiest if the spouse looks up to him for guidance and support. He will be talented and will have good self-control. The spouse can be a foreigner who would be an artist or an intellectual. She may not be worldly wise and will be sentimental.

The spouse will be indiscreet. The children of the native will not be well behaved, and they will cause unhappiness to him. Jupiter is the significator for husband in a female nativity is also the owner of the seventh house. It, therefore, represents husband doubly.

Influence of separating planets on Jupiter will work for separation of the native from him, and if Ketu or a planet having its mooltrikona sign in the sixth-eighth or twelfth house aspects or is associated with it the husband will be short-lived.

The native’s children will live at a short distance from him in a different town. The younger brothers/sisters of the native will gain through their children.

If you are looking for more insights about 7th House in Vedic Astrology then go through with 7th lord in different houses.